More industries are looking for ways to use artificial intelligence. What will that mean for the technology’s future?

This article is part of the May / June 2016 Business Report, AI Takes Off.
View the full report

For Robert Welborn, head of data science for the insurer and finance company USAA, 2015 was the year machine learning started to make commercial sense. Access to improved machine-learning tools, cheaper processing technology, and a sharp decline in the cost of storing data were key. When those developments were combined with USAA’s abundance of data, a technology studied for decades suddenly seemed practical.

Insurance, finance, manufacturing, oil and gas, auto manufacturing, health care: these may not be the industries that first spring to mind when you think of artificial intelligence. But as technology companies like Google and Baidu build labs and pioneer advances in the field, a broader group of industries are beginning to investigate how AI can work for them, too.

How will AI develop as it is commercialized, and how will the technology change these diverse industries? Those are the big questions of this Business Report.

Today the industry selling AI software and services remains a small one. Dave Schubmehl, research director at IDC, calculates that sales for all companies selling cognitive software platforms —excluding companies like Google and Facebook, which do research for their own use—added up to $1 billion last year. He predicts that by 2020 that number will exceed $10 billion. Other than a few large players like IBM and Palantir Technologies, AI remains a market of startups: 2,600 companies, by Bloomberg’s count.

USAA, just one early adopter, has been testing ways to use AI to fine-tune its detection of identity theft. Its system looks for patterns that don’t match a customer’s typical behavior and identifies those anomalies even on the first instance, Welborn says. Traditional systems wouldn’t catch a new pattern of crime until the second time it happened. “Our learning systems are really good at understanding things that look like fraud,” he says.

Another project being tested at USAA tries to improve customer service. It involves an AI technology built by Saffron, a division of Intel, using an approach designed to mimic the randomness of the connections made by the human brain. By combining 7,000 different factors, the technology can match broad patterns of customer behavior to that of specific members, and 88 percent of the time it can correctly predict things like how certain people might next contact USAA (Web? phone? e-mail?) and what products they will be looking for when they do. Without the AI, USAA’s systems were guessing right 50 percent of the time. That test is now being expanded.

General Electric is using AI to improve service on its highly engineered jet engines. By combining a form of AI called computer vision (originally developed to categorize movies and TV footage when GE owned NBC Universal) with CAD drawings and data from cameras and infrared detectors, GE has improved its detection of cracks and other problems in airplane engine blades.

The system eliminates errors common to traditional human reviews, such as a dip in detections on Fridays and Mondays, but also relies on human experts to confirm its alerts. The program then learns from that feedback, says Colin Parris, GE’s vice president of software research.

AI can be a driver of new products and services, too. Through its MyFitnessPal exercise- and calorie-tracking app and other products, sportswear maker Under Armour is connected to 160 million consumers. But rather than merely being limited to logging people’s exercise results, the company made a deal with IBM’s cognitive computing business, Watson, to combine its data about fitness and nutrition routines with information gleaned from research studies and other third-party data on sleep, activity, fitness, and nutrition. The goal: to tell people with a given goal how they can achieve it, making the company more relevant to those 160 million customers. 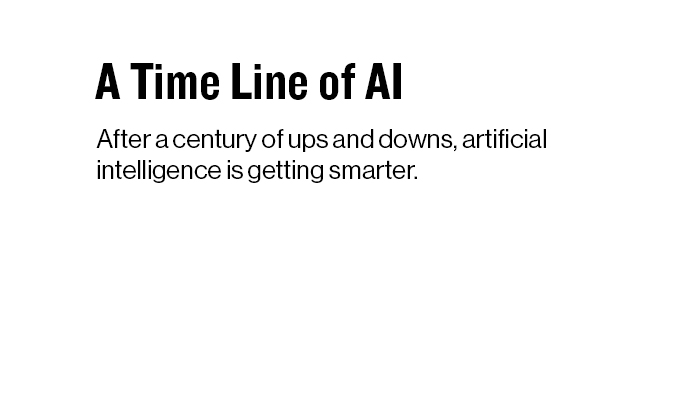 To companies like USAA and Under Armour, the future of AI looks less like the anthropomorphic robots in movies and more like tools that get better all the time. And despite fears that AI will lead to the widespread replacement of workers, human judgment and feedback remain integral to improving machine-learning systems. As John Giannandrea, vice president of engineering at Google, told writer Robert D. Hof for his story later in this report: “Even if you have a fancy car, you still have to decide where to go.”