Piet Dircke is standing on the sidewalk at Amsterdam’s Schiphol Airport pointing up to the building’s second floor. Or, as he puts it, sea level. The tarmac, where planes taxi nearby, should be about four meters under water, he explains. It isn’t submerged because of more than a century of work by Dutch engineers, like Dircke, on a complex network of dikes, sea barriers, and pumping stations.

Rising seas caused by climate change have made that work harder. But for Dircke, the head of water management at Dutch engineering consultancy Arcadis, there is a financial benefit: a global boom in business. Around the world coastal areas find themselves at increased risk of flooding, and that’s helped Arcadis’s revenue from its water business increase 42 percent since 2011, to €453 million ($515 million).

It was Arcadis, under Dircke’s leadership, that shored up New Orleans’s defenses after Hurricane Katrina— a $200 million project. After Superstorm Sandy, Arcadis got about half the contracts to ensure important New York City infrastructure would be protected against future storms. From Wuhan to São Paulo to Miami, Dircke has been repeatedly hired in recent years to help big cities contend with a changing climate.

Piet Dircke (left) looks across the Nieuwe Waterweg from beneath one of the giant arms of the Maeslantkering storm surge barrier.

These risks include more intense storms, and seas already up 5.5 inches over the last century. Though not everyone agrees, many experts point to Sandy as an example of how climate change has already worsened economic losses, which in the case of that storm topped $50 billion. A recent study in Nature estimated that by 2100 Antarctic thawing alone could raise sea levels by another three feet, threatening coastal areas as disparate as Bangladesh and the launch complex at the Kennedy Space Center.

Today in North Jakarta, Dircke says, “you can stand on the road and put your hand up over the retaining wall—and touch the ocean.”

Droughts and inland flooding are on the rise as well, menacing fresh water supplies. After Wuhan, China—a riverine city of over 10 million hundreds of miles from the sea—suffered its worst rainstorms in half a century during last year’s El Niño weather pattern, the city awarded Arcadis the primary contract for a project to reduce flooding, store excess water for later use, and reimagine the city’s public spaces. China has 15 similar projects already in the works.

Though Dutch water management conjures an image of massive barriers, on a visit to the country’s shore with Dircke, much of the magic is hidden from view. Instead of only offering single-purpose flood protection—which tends to be in demand only after a catastrophe like Katrina—Arcadis designs systems that serve purposes beyond water control. By pairing water management with other goals such as economic revitalization, reduced urban blight, and increased land use, these projects become more compelling to cities than just building dikes and barriers.

A walkway above the Katwijk multiuse dike, with the ocean to the right. A parking garage is beneath the dunes.

A grass-and-glass entrance to the underground parking garage built alongside the protective barrier.

A good example of this model is Katwijk, a modest village whose beachfront has been transformed by an invisible dike. Between the beach and an esplanade of austere row houses is an undulating dune covered in swaying vegetation, walking paths, and hints of modernity in arcing, glass-and-grass doorways that spring from the sand.

Those doorways lead below ground to a design Arcadis helped develop, a dike that not only protects Katwijk and the nation behind it, but also includes a 650-car underground parking garage running along the floodwall—reducing surface sprawl, and providing easy access for visiting beachgoers. A similar project, just nine miles away in Scheveningen, shrouds its dike in a multilevel promenade, adding commercial value to a structure built primarily as “a matter of national security,” as Dircke put it.

Beyond incorporating flood control into designs with a broader purpose, the Netherlands continues to experiment with new ways to manage coastlines. Near the Hague is the Sand Engine, an experimental project that essentially involves dumping tons of sand in one spot on the beach—and letting the wind and water do the heavy lifting of distributing it along the coast. Early results show the method bolstering natural flood protection up to four times longer than traditional dredging of underwater sand to reinforce beaches. 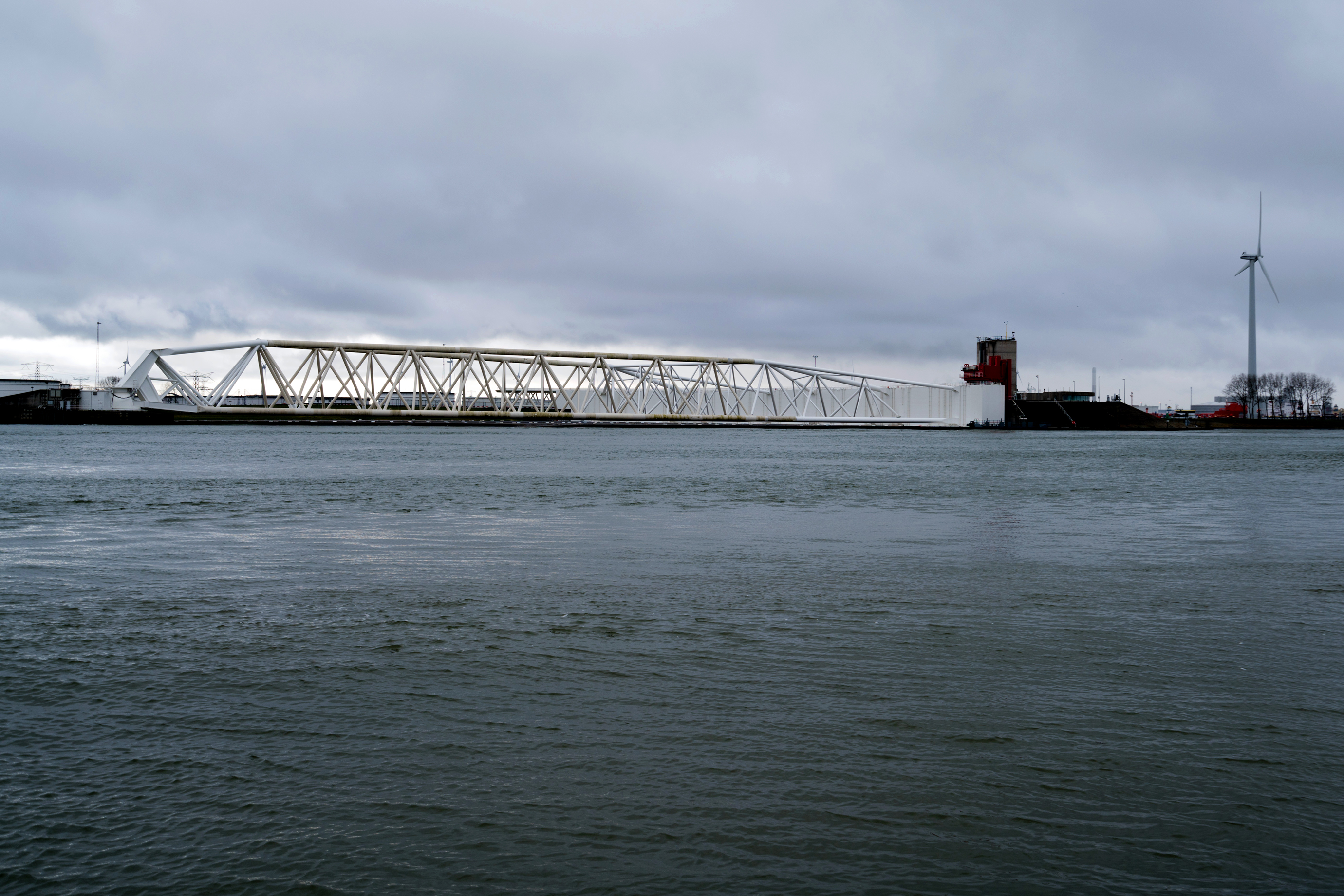 View of one arm of the Maeslantkering storm surge barrier from across a shipping canal that leads to Rotterdam. 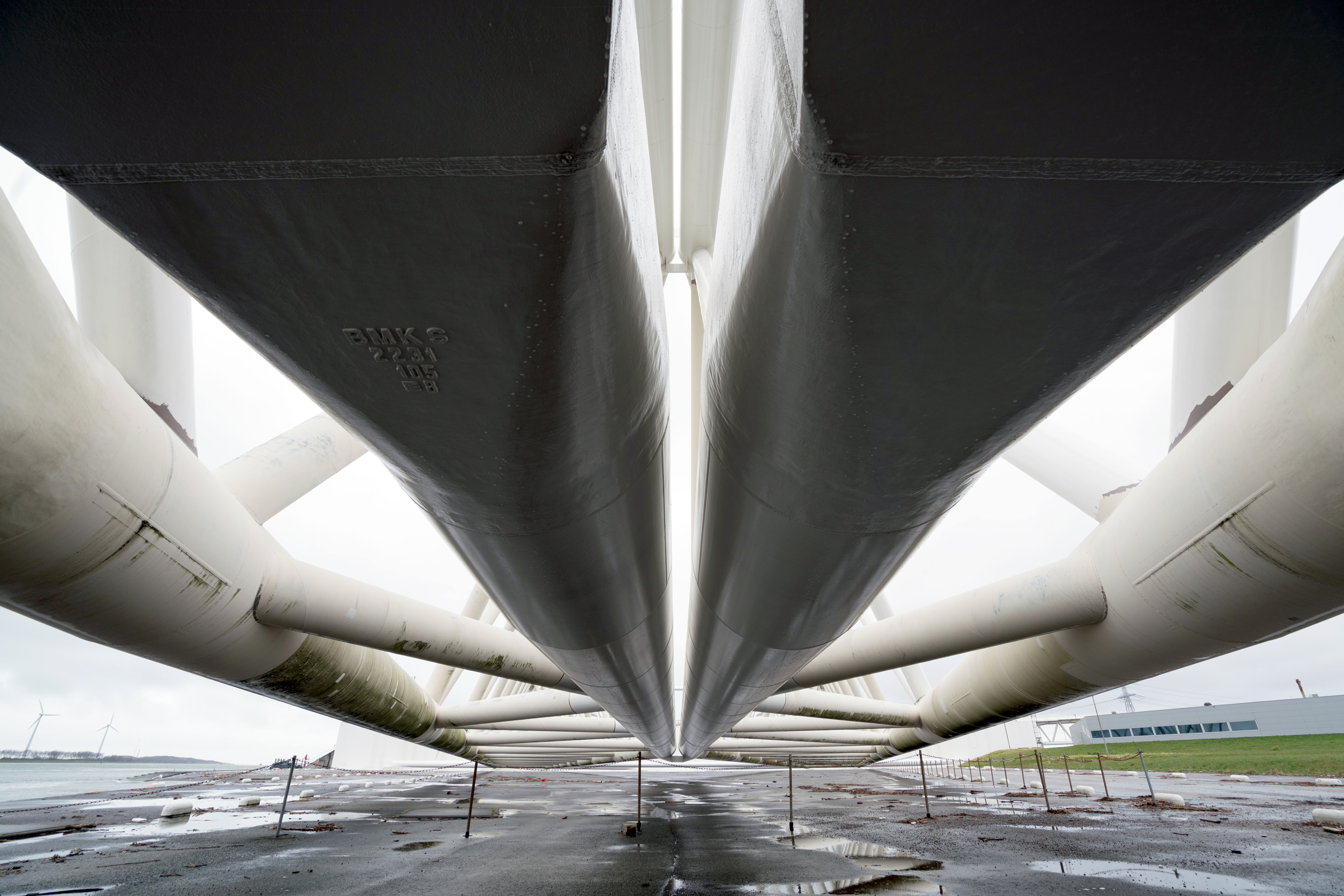 View from beneath the Maeslantkering storm surge barrier, one of the largest moveable, human-made structures in the world. 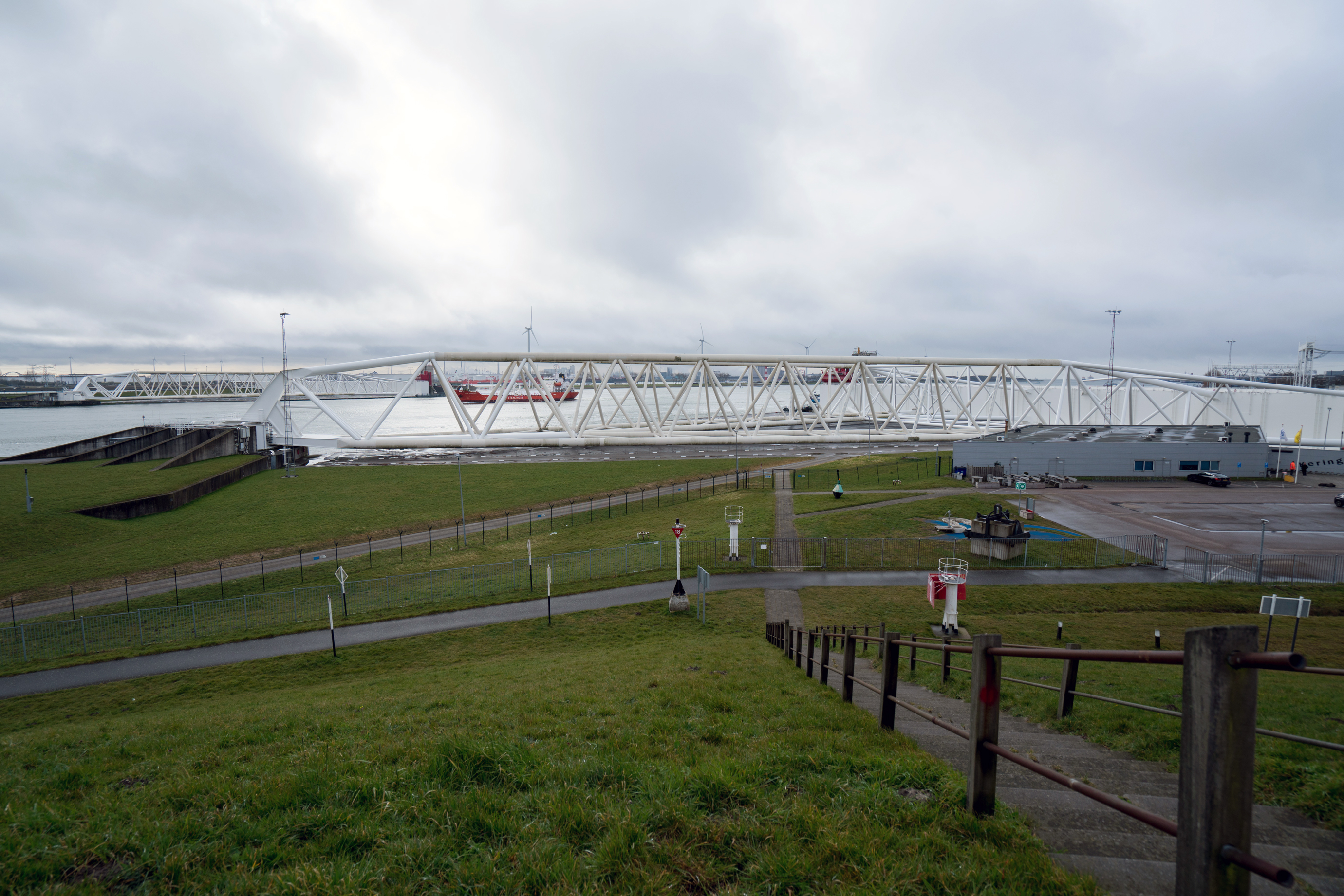 A freighter passes through the open arms of the Maeslantkering storm surge barrier.

Further south, in the delta that connects Rotterdam with the North Sea, we visited something closer to the classic model, though on a grand scale: one of the largest movable structures on the planet, the Maeslantkering storm barrier. Its two arms, each as long as the Eiffel Tower and about as heavy, are designed to pivot across the 1,181-foot wide Nieuwe Waterweg, protecting Rotterdam and much of the country from the sort of strong storms that at their most extreme might come once in 10,000 years. Designing the giant barrier was complicated by the requirement that the gates would have to spend most of their time open to allow fresh water to drain into the sea, and ships to pass through to Rotterdam, Europe’s busiest port.

Completed in 1997, Maeslantkering is programmed to close not just for the most extreme case, but for any  storm surge of three meters or higher—an occurrence of about one in 10 years. But its operation is also being affected by climate change as sea-level rise and more intense storms have led to predictions that by 2050 the barrier will likely have to be closed twice as often.

With similar projections for the rest of the globe’s coastlines, “there is plenty of work for me out there,” says Dircke.