A startup in California has raised $500 million to chase the elusive dream of fusion power. Is this crazy, or is the company on to something?

Above: Rings of super-hot plasma are shot into the confinement vessel at the center. When they collide there, they release energy.

No energy technology is more tantalizing than fusion, but no energy technology has proved more disappointing. So how has a fusion company in Southern California raised nearly half a billion dollars from the likes of Goldman Sachs and Paul Allen? Does it actually see a way to build a reactor that could generate vast amounts of clean power, even while other fusion projects have perpetually remained 20 years away from reality?

The red horseshoe-shaped bar is one of the electromagnets that help control the plasma.

In search of the answers, I visited the headquarters of Tri Alpha Energy in the spring. The coastal fog was lifting from the rolling hills in Foothill Ranch as I stepped inside the building, which houses both Tri Alpha’s offices and its technology lab. A locomotive-sized plasma generator sat surrounded by a dense tangle of scaffolding, sensors, gauges, magnets, instruments, cables, and pipes.

Unlike fission, which splits atoms apart to generate heat in today’s nuclear power plants, fusion smashes atomic nuclei together, releasing huge amounts of energy in the process—the same reaction that occurs in the sun.

For decades, fusion research has involved large, doughnut-shaped machines called tokamaks, which exert powerful magnetic fields to compress the super-hot plasma that contains the atoms to be fused. Those systems have been fiendishly hard to perfect: the director of the International Thermonuclear Experimental Reactor project, which is already years behind schedule, said in April that the fusion reactor would not be switched on until 2025 and would not produce power until at least 2035, requiring overruns of more than $5 billion on top of the $17 billion or so that has already been poured in. 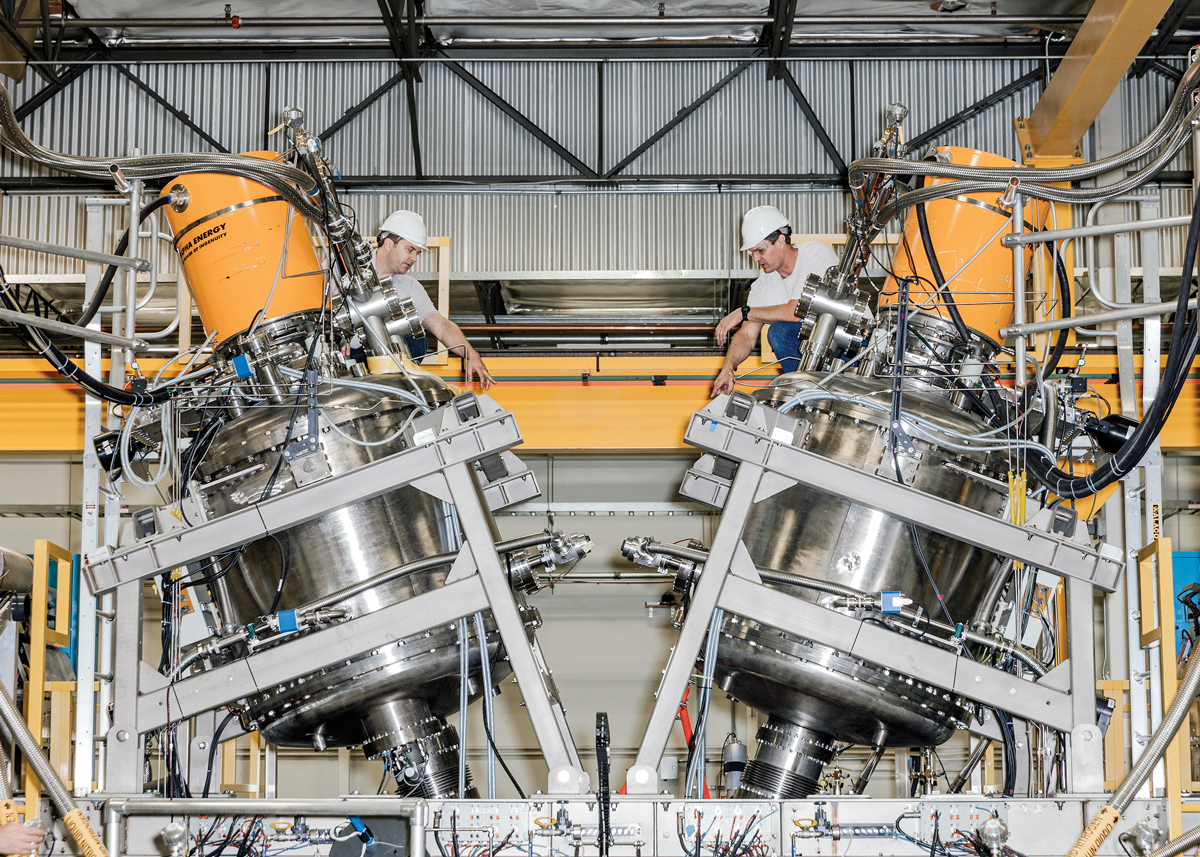 The two workers pictured here are above the central confinement vessel. The next version, expected to be completed in 2017, will be 33 percent longer and capable of heating plasma up to 40 million °C. 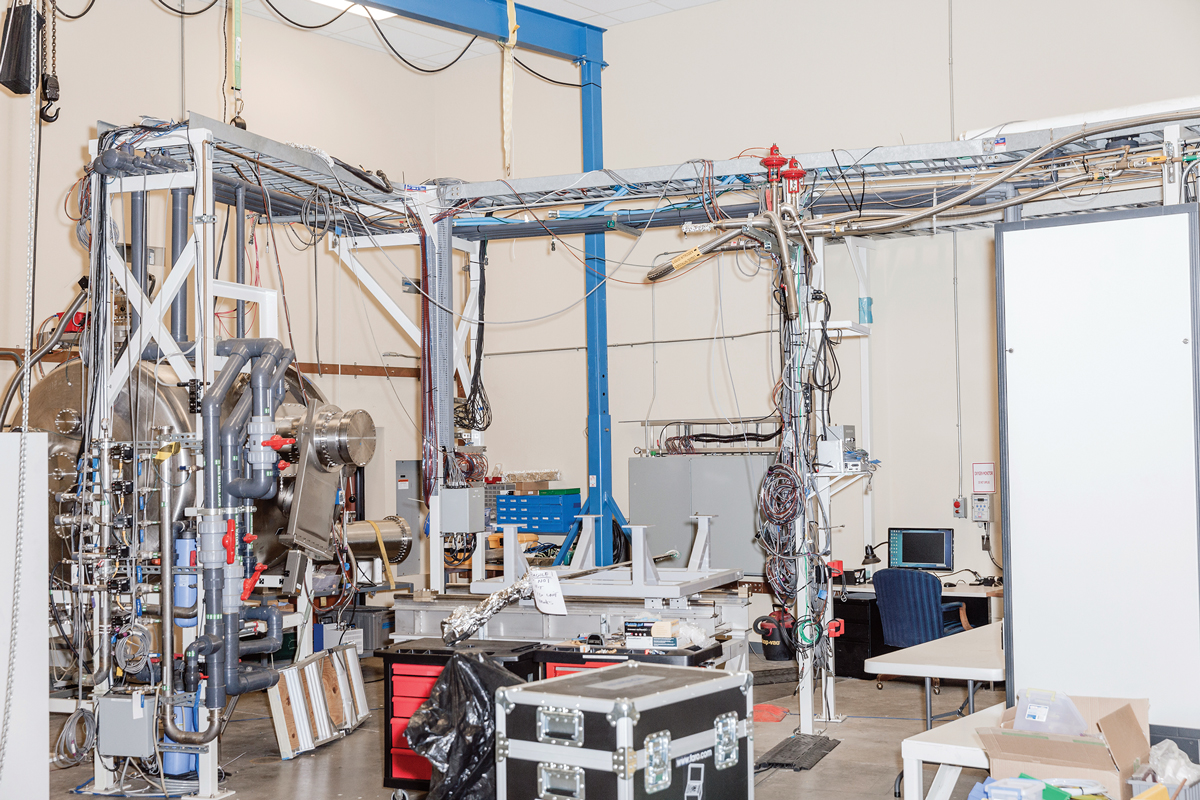 The generator has some 25 miles of fiber-optic cable and a power supply of 25 megawatts—enough to power a small town. 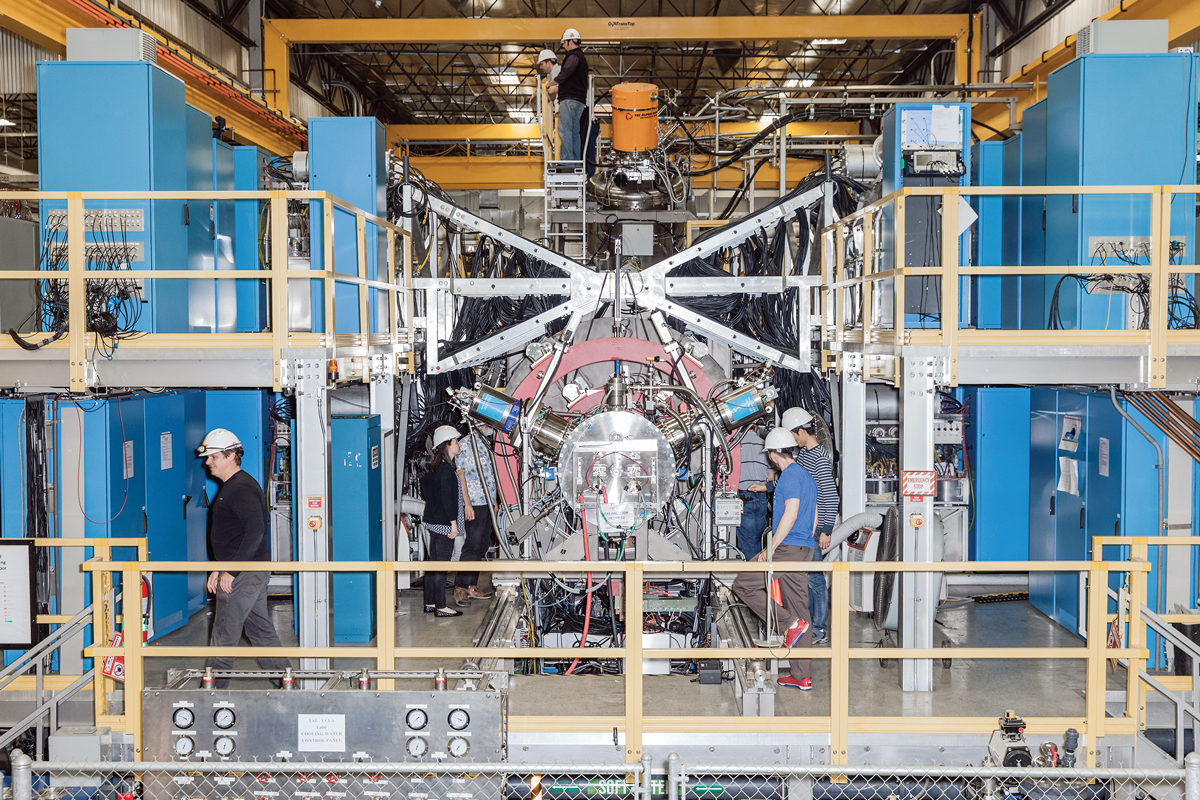 This end of the machine acts like a dust trap, collecting unwanted particles.

Tri Alpha and a handful of other fusion startups are pursuing different designs that could be simpler and less costly. Tri Alpha’s setup borrows some of the principles of high-energy particle accelerators, such as the Large Hadron Collider, to fire beams of plasma into a central vessel where the fusion reaction takes place. Last August the company said it had succeeded in keeping a high-energy plasma stable in the vessel for five milliseconds—an infinitesimal instant of time, but enough to show that it could be done indefinitely. Since then that time has been upped to 11.5 milliseconds.

Most of the cabling in this close-up view runs to various diagnostic systems that capture data about energy generated inside the machine.

The next challenge is to make the plasma hot enough for the fusion reaction to generate more energy than is needed to run it. How hot? Something like 3 billion °C, or 200 times the temperature of the sun’s core. No metal on Earth could withstand such a temperature. But because the roiling ball of gas is confined by a powerful electromagnetic field, it doesn’t touch the interior of the machine.

The photos seen here were taken a few days before Tri Alpha began dismantling the machine to build a much larger and more powerful version that will fully demonstrate the concept. That could lead to a prototype reactor sometime in the 2020s.